Counting Links To Your Posts

The new Technorati link count widget provides a way for bloggers to display how many links a blog post gets. Doing it in Roller is easy, add the velocity macro below to WEB-INF/classes/weblog.vm and then call that macro from the default blog page template (Weblog).

Tantek has more details about the release on the Technorati Blog.

CardSpace and the Identity Ecosystem

An interesting introduction came over the transom recently. I've read Kim Cameron's blog before but the honest truth is: I've really been flumoxed by the wide range in the cast of characters and agendas in the identity fray. Some seem overly concerned with identity as a line of business, others concerned with seeing themselves at the center of the discussion. Meeting Kim was a treat, even though he had the cards stacked against him coming from Microsoft, we had a great conversation. When I think of Microsoft I think of the many aspersions; "the Borg", "the evil empire", "The Man", "the big cathedral", "stifling monopolists", "makers of the Blue Screen Of Death", "vendor lock-in creeps", "virus and security-hole mongering dumbos." OK, I'll stop. Of course the reality is that good people also show up in bad places and they make good things happen nonetheless. C# looks and the .Net framework does great stuff for developer productivity. There's a lot of innovation happening in Microsoft's search and online services divisions. To be fair, a lot of Microsoft bashing is another form of bigotry that we have to get beyond. Microsoft has a lot great people and their executive leadership has done a lot of really bad things, so move along. The good guys inside the cathedral need constructive engagement lest they never prevail over the Matrix; more than anyone they (and Melinda) have the capacity to draw the Sith away from the Dark Side (re "constructive engagement": I'm thinking Clinton's Sino-American oppositional/collaborative stance that rides on the inevitable, not Reagan's failure vis-a-vis South Africa, which was wimpy coddling of the anti-divestment movement).

Speaking of the Jedi and Neo architype, characters and ranches in Santa Barbara, endorsements from Doc Searls always get my attention:

When the conversation started to heat up after DIDW, the Neo role was being played by a character with the unlikely title of "Architect", working inside the most unlikely company of all: Microsoft. Kim Cameron is his name, and his architecture is the Identity Metasystem. Note that I don't say "Microsoft's Identity Metasystem". That's because Kim and Microsoft are going out of their way to be nonproprietary about it. They know they can't force an identity system on the world. They tried that already with Passport and failed miserably.

I prefer to think of the various roles of Identity Providers, Relying Parties and People as part of an ecosystem. But metasystem is fine, let's just stick to that vernacular. Kim is the author of Laws of Identity. Again citing the same article from Doc for a nice summarization: 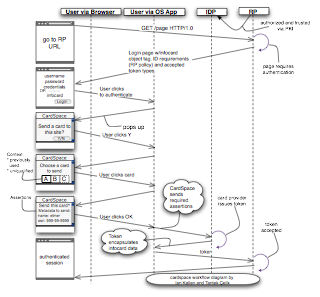 This is powerful stuff. I'm very pleased with our implementation of OpenID to support blog claiming but I know that this is the tip of the iceberg. There are people on the web who aren't authoring and sharing; they may not have nor want a URL that they can use for their identity. So while I'm committed to extending our support for OpenID, I'm also looking beyond it. The Laws are exemplary guiding principles in my exploration of the topic. Kim and Doc joined Kristopher Tate (the Zooomr dude), Tantek and myself to talk about CardSpace, Microsoft's implementation of an identity metasystem. After discussing some of the high-level issues facing the web, the blogosphere and user generated content participant created artifacts in general, we dived deep on CardSpace. Since CardSpace will be shipping with Vista (as well as distributed for Windows XP), by my estimation the coming ubiquity of user-centric identity isn't something to ignore. As we worked through the CardSpace workflow with Kim, Tantek and I came up with this diagram (Glossary: "IDP" = "Identity Provider", "RP" = "Relying Party", CardSpace is a page embedded app so there's both interaction via the browser and directly in the OS). This is of course just Microsoft's implementation but the Good Thing is that they aren't clutching it tightly, folks working on open source implementations (keep an eye on the OSIS working group) will make sure that the identity metasystem isn't a Borg in sheeps clothing.

Identities on the contemporary web suffer from a lot of accountability, authenticity and siloization deficiencies. Pings, trackbacks and comments all suffer from these and in turn we all do in the form of web spam. Reputation systems (such as Technrati's authority ranking) mitigate some of these problems but there is still much to do. I'm really pleased to have met Kim, he's one of the good guys and I look forward to working more folks pushing the online identity envelope. If you're going to be joining Internet Identity Workshop coming up, I'll see you there!